The Organization of American States (Spanish: Organización de los Estados Americanos, Portuguese: Organização dos Estados Americanos, French: Organisation des États américains), or the OAS or OEA, is a continental organization that was founded on 30 April 1948, for the purposes of solidarity and cooperation among its member states within the Western Hemisphere. During the Cold War, the United States hoped the OAS would be a bulwark against the spread of communism.[1] Since the 1990s, the organization has focused on election monitoring. Headquartered in the United States‘ capital Washington, D.C., the OAS’s members are the 35 independent states of the Americas. 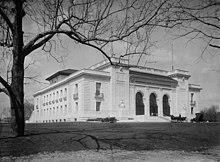 The Pan American Union shortly after its construction in 1910

The notion of an international union in the New World was first put forward during the liberation of the Americas by José de San Martín and Simón Bolívar[3] who, at the 1826 Congress of Panama (still being part of Colombia), proposed creating a league of American republics, with a common military, a mutual defense pact, and a supranational parliamentary assembly. This meeting was attended by representatives of Gran Colombia (comprising the modern-day countries of Colombia, Ecuador, Panama and Venezuela), Argentina, Peru, Bolivia, The United Provinces of Central America, and Mexico but the grandly titled “Treaty of Union, League, and Perpetual Confederation” was ultimately ratified only by Gran Colombia. Bolívar’s dream soon floundered with civil war in Gran Colombia, the disintegration of Central America, and the emergence of national rather than New World outlooks in the newly independent American republics. Bolívar’s dream of American unity was meant to unify Hispanic American nations against external powers. 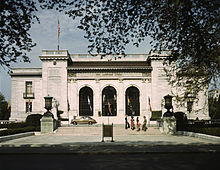 In the mid-1930s, U.S. President Franklin Delano Roosevelt organized an inter-American conference in Buenos Aires. One of the items at the conference was a “League of Nations of the Americas”, an idea proposed by Colombia, Guatemala, and the Dominican Republic.[4] At the subsequent Inter-American Conference for the Maintenance of Peace, 21 nations pledged to remain neutral in the event of a conflict between any two members.[5] The experience of World War II convinced hemispheric governments that unilateral action could not ensure the territorial integrity of the American nations in the event of external aggression. To meet the challenges of global conflict in the postwar world and to contain conflicts within the hemisphere, they adopted a system of collective security, the Inter-American Treaty of Reciprocal Assistance (Rio Treaty) signed in 1947 in Rio de Janeiro.

The ninth International Conference of American States was held in Bogotá between March and May 1948 and led by United States Secretary of State George Marshall, a meeting which led to a pledge by members to fight communism in the western hemisphere.[6] This was the event that saw the birth of the OAS as it stands today, with the signature by 21 American countries of the Charter of the Organization of American States on 30 April 1948 (in effect since December 1951). The meeting also adopted the American Declaration of the Rights and Duties of Man, the world’s first general human rights instrument.

The transition from the Pan American Union to OAS would have been smooth if it had not been for the assassination of Colombian leader Jorge Eliécer Gaitán. The Director General of the former, Alberto Lleras Camargo, became the Organization’s first Secretary General. The current Secretary General is former Uruguayan minister of foreign affairs Luis Almagro.

Significant milestones in the history of the OAS since the signing of the Charter have included the following:

1960: First application of the Inter-American Treaty of Reciprocal Assistance against the regime of Rafael Trujillo in Dominican Republic

1991: Adoption of Resolution 1080, which requires the Secretary General to convene the Permanent Council within ten days of a coup d’état in any member country.

2009: OAS suspends Honduras due to the coup which ousted president Manuel Zelaya.

2010: The OAS intervened in the Haiti 2010 Presidential election, demanding that the third-place candidate be permitted to participate in a runoff election with the first-place candidate,[7] using flawed statistics to suggest the second place showing of the left-wing candidate, Jude Célestin, was invalid.[8]

2011: OAS lifts the suspension of Honduras with the return of Manuel Zelaya from exile.

2017: Venezuela announces it will begin the process to leave the OAS in response to what it alleged was OAS interference in Venezuela’s political crisis.

2020: OAS concluded that the 2019 Bolivian general election was fraudulent. However the analyses were deemed flawed by the New York Times, who concluded that there was some fraud but that it was unclear how much or if it was sufficient to change the result of the election.[9][10] The Center for Economic and Policy Research (CEPR) concluded that “it is very likely that Morales won the required 10 percentage point margin to win in the first round of the election on October 20, 2019.”[11] David Rosnick, an economist for CEPR, reported that “a basic coding error” was discovered in the OAS’s data. Instead of ordering time stamps on voting tally sheets chronologically, they were ordered alphabetically, leading to the “inexplicable change in trend” alleged by the OAS in the preliminary count.
[/av_textblock]